What can I say, it’s been an amazing holiday.

As someone who travels to the US on a regular basis, Canada has been a real revelation, and my only regret is that I haven’t visited sooner.

There have been so many sights and experiences that I want to recount, but first, a new discovery: ice wines, and especially ice cider.

My experience with ice wine or Eiswein has mainly been limited to the excellent wines from Willi Opitz, so it was with some surprise that on gourmet food tour in Montreal, we were taken into a shop selling a large selection of Canadian wine.  And there among the reds and whites of Okanagan Valley and the Niagara Peninsula were a huge selection of Canadian Ice Wines and Ice Ciders.

Ice wine is an ultra-rich, super sweet dessert wine made from the intense liquid of naturally frozen grapes. The tradition of making ice wine is well-rooted in Austria and Germany, however Canada has got the current claim to ice wine-making fame, with the majority of the market’s ice wine offerings coming from British Columbia.

Ice cider on the other hand is the cider equivalent of ice wine: a fermented beverage made from the frozen juice of apples. There are two main approaches to producing ice cider: cryoconcentration and cryoextraction. Cryoconcentration involves harvesting the fruits late in season and leaving them in fresh storage until late December, when they are pressed and the fresh juice is left to freeze naturally. In January, the concentrated juice begins the process of cold fermentation. Cryoextraction (not the same as the cryoextraction of wine) is similar to the traditional method used to produce ice wine: apples are left on the trees, at the mercy of the weather, until the end of January. They are picked when the temperature hovers around -8°C to -15°C, and then pressed and left to cold ferment for months.

Interestingly, most of the Canadian ice wine and ice cider is exported to Japan and China, and after Swiss wine, is the most expensive export.

So below were some of the ones I got to try: 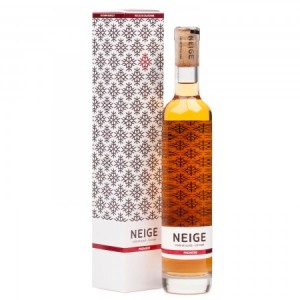 Union Libre has been developed by natural cryoconcentratio.  This cider has aromas of honey and pear. Long finish, rich and balanced, it goes perfectly with cheeses and desserts. Made with Cortland, Empire, Spartan and McIntosh apples.

Pellar Estate Cabernet Franc Icewine.  Made from 100% Cabernet Franc. The aroma renders the boldness of ripe red berries with complex notes of spice and the sweetness of rhubarb. Once sipped, the reward is that of an explosion of luscious red berries, delicate, yet complex spice and rhubarb with a lingering finish reminiscent of fresh limes.