Sometimes fate can do you a favour. And she certainly did that today when the uptown line which would have taken me back to my hotel in midtown was closed for repairs.

As I was forced to walk back from Spring Street up towards Union Square, I managed to find a number of foodie destinations that I would otherwise have never discovered: 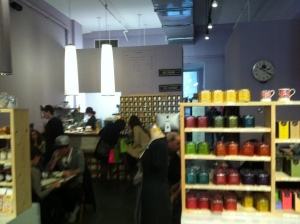 Harney & Sons has been in the business of gourmet tea for over 25 years. Their selection is large, and includes green tea, black tea, and white tea. They also have a selection of tea gifts for all kinds of occasions, including end of year Holiday Gifts.

While primarily a retail shop, Harney & Sons SoHo also features a tea lounge where guests can sit and enjoy a cup of tea, nibble on scones and other small treats, and take a break from the hustle and bustle.  There is a wall of teas behind the tasting bar that allows customers to speak with a tea specialist and try a sample of whatever intrigues them, which is a wonderful way to try before they buy. 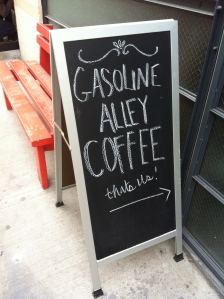 A relative new addition to the New York Coffee scene, this little brewster on Lafayette Street (the NoHo district) is essentially a glass box serving Black Cat Intelligentsia coffee, as well as a small selection of other beverages. Do have one of their donuts which seem to sell out very rapidly. The lemon poppyseed donut…I’m salivating like Homer Simpson now… 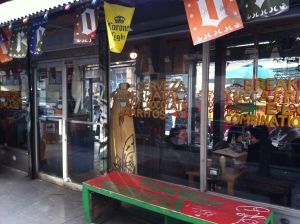 The original Pinche started life in Tijuana before heading to Nolita and Soho. They’re open for breakfast, lunch and dinner, and serve a fantastic selection of burritos (served till 4pm) and Tacos. Time Out New York recently voted them as one of the best tacos in the city: look out for their Taco de Pescado, which comes with a cabbage and coriander dressing, or else there’s the Shrimp version.  There’s also a selection of sides (like the mayonnaise and cheese smothered sweet corn, which I just recently discovered is 100% authentic and not a Valentine Warner concoction) and homemade waters, including Tamarind, Watermelon or Cantaloupe. 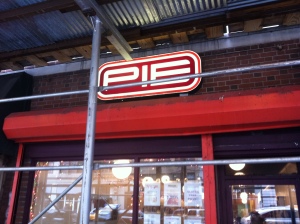 I have to admit, as the distinctive sign caught my eye across the road, I assumed I was going to find pure Americana, in the form of apple pie.  Sadly, while this doesn’t serve THAT kind of pie, what’s not to like about a place that sells pizza by the pound? Serving a thin, chewy crust, they cater for all: gluten-free, vegan, whole wheat crust, and a good selection of toppings. Theres a nice range of beers (including gluten free – who knew?).